Book Notes: Against the Grain 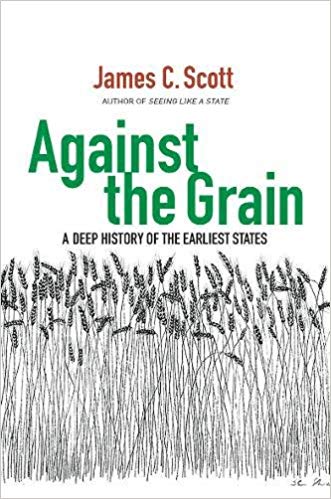 This is one of those Joe Rogan-esque questions that has stuck with me after reading it somewhere. So I was happy to find this book which looks at the shift from the nomadic hunter-gather lifestyle to the settled agricultural life among early humans.

Scott spends a lot of time pointing out flaws in the historiography of early states. Think about how many metaphors and loaded terms are used about early civilization:

Humans evolved from a nomadic lifestyle to an agricultural one. But is this really a higher form of existence? Early humans (especially in the multi-species resettlement camp) had an extremely wide variety of food options. They spent less time finding calories. They grew some crops, foraged, fished, and hunted. If there were any problems at a given site, they simply moved on. Doesn’t sound so bad.

If a complex settled society (eg the Incas) reverts to pastoralism it is said to have collapsed.

Scott says this bias is because you simply can’t write a history if there is no artifact or writing to look at. History is written about the kings because they leave castles, written records, and other cool things behind to study.

A central question of the book is “If pre-agricultural life was so wonderful why did humans become so grain dependent?

The answer is that the rise of grains went in parallel with the rise of early states. Farming grains was beneficial for the state so the states encouraged grain cultivation whenever possible.

Let’s look at a list of properties of grains that made them attractive to states:

But grain had many important disadvantages:

So, yes, early H-Gs a better diet and “work-life balance.”And they didn’t have the energy density of grains that allowed societies to become stratified and full of non-food production roles.