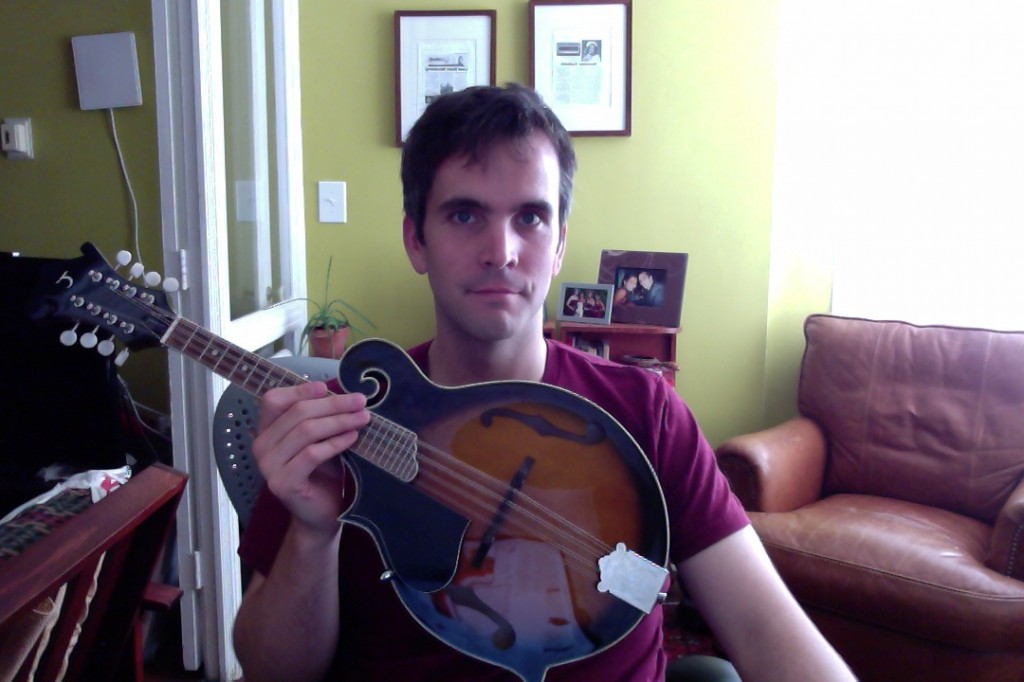 Let me tell you the story of how I got into playing mandolin as a long-time guitar player.

I stumbled into the mandolin when I was doing Flashband here in DC. (Flashband is a local project that gets musicians to mix by organizing temporary bands. You do a meet-n-jam with other musicians, then form a single serving band and play a show in about a month).

When I showed up to the initial jam session, it was pretty much a sausage fest of guitar players. I mean there must have been six guitar players for every drummer, bass player, and so on.

The band I was interested in joining already had two guitarists signed up and they weren’t looking for more.

The theme was “Americana Bandstand” with the idea being to re-interpret pop songs in a country / American roots style.

So I thought what the hell, I’ll learn to play mandolin.

How hard can it be right?

I’m writing this as a one week “progress report” after starting the mandolin. Hopefully it will help other guitar players get quickly up to speed.

The Pros of Picking Up Mandolin as a Guitar Player

Cons of Switching to Mandolin

The mandolin is the modern descendant of a bunch of non-standardized lute-like instruments from the renaissance (wikipedia the full details).

Its 8 strings are organized almost like a 12-string guitar, where you have pairs of strings so each time you fret a note or pick a string you are actually playing two notes in unison.

And the mandolin is tuned in perfect fifths (G D A E) like a violin, which means that all the chord shapes you learned for guitar will not help with mandolin.

How To Quickly Get Started

I ordered a mandolin online, but it was going to take a while to come and I knew I would need a few consecutive days of practice in order to learn the new chords and note positions.

Whenever I’m trying to learn some new musical skill the key is to practice consecutively over a few days – this helps the muscle memory get consolidated so things become automatic.

And with our first band practice coming up in a few days I knew I needed to find a way of learning the right chord shapes as soon as possible.

So I improvised a training “mandolin” and took the two lower strings off my strat. The high E string stays the same, but you tune the others down (way down) to D, G and A.

With the strings tuned down so far there was a ton of fret buzz and the tone was horrible, but it was fine for learning the basic chord shapes.

The first thing that popped into my head as the ultimate mandolin song was REM’s Losing My Religion. A classic from the golden age of MTV (ie when they actually played music). This would be my mandolin “inspiration song” because it has a mix of single line melodies and uses a good range of the most common chord shapes.

I found a great tutorial on YouTube and learned most of the riffs and chords from that:

I couldn’t clearly “read” some of the chord shapes from his fingers, so I made some charts of the chords:

When the mandolin I ordered finally came, I tore into the box and got playing. Making the switch to the actual mandolin was actually a relief because some of the chord shapes were a big stretch on the guitar because of the wider spaces between frets.

It took a few tunings for the strings to stabilize and stay in tune but it was nicely set up and plays with good intonation up the neck.

I’m happy with the instrument so far. The mandolin I got is from Tanglewood (model TWMX-S-MVSG – catchy name no?) and its an “F-style” mandolin, meaning it has that curlicue on the bass end of the instrument. The action could stand to be a bit lower, so I am going to look at lowering the adjustable bridge and filing the nut down some.

Bottom line: this experience has taught me how picking up a new instrument is a great way to get out of a musical rut. If you find yourself playing the same few songs over and over whenever you pick up your guitar, why not pick up the mandolin or a new stringed instrument?